‘Men, it has been well said, think in herds; it will be seen that they go mad in herds, while they only recover their senses slowly, and one by one,’ wrote Charles Mackay in his  classic nineteenth century compendium of human folly Extraordinary Popular Delusions and the Madness of Crowds.

Despite the two-week postponement of our formal withdrawal from the European Union, there is very little indication that those who inspired the greatest folly in our national history have begun to recover their senses, either collectively or individually.

In the last three days a petition calling for the revocation of Article 50 reached five million signatures, and more than one million people marched in London to call for a second referendum.   In the same weekend a gaggle of Tory millionaires fetched up at Checquers in limousines and open-topped sports cars to consider the debacle they have inflicted on the nation – and some of them, as always, were looking to see how they might personally benefit from it.

That time has long gone.   And today one of those attendees – the most self-seeking and sociopathic of our current crop of gotterdamerung politicians – could be found on the pages of the Daily Telegraph.

Yes, it is of Boris Johnson that I speak.   Many of us will know that Johnson has had his hair cut and lost weight in recent weeks, apparently because he has a new girlfriend.  That’s good news for her, and one can only hope that he brings her the happiness, security and the prospect of a better future that he has so coolly helped to strip from so many EU nationals and his fellow-citizens in his obscene and utterly amoral pursuit of the BIG JOB.

But no matter how much the beast is shorn or how many pounds of blubber he loses, Johnson will never be anything more than a grifter, a liar, a demagogue, and one of the principal architects of our ongoing national collapse.  If anyone doubted this, just consider the latest example of rhetorical flatulence that the Telegraph chose to proclaim in banner headlines today: 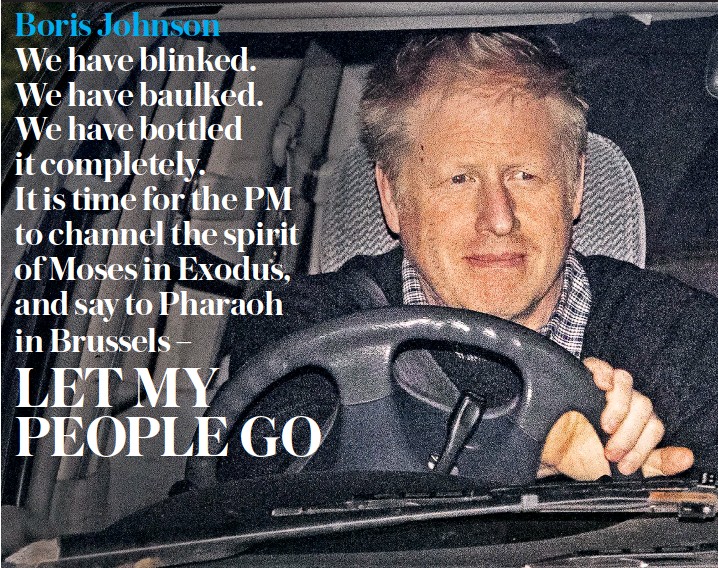 That front page is as succinct an explanation for our current predicament as anything you are likely to find anywhere.  I have no problem about politicians using metaphors.  On the contrary, metaphors can illuminate what they refer to and make stale ideas seem fresh and new.  Nor do I object to Biblical comparisons per se.  Paul Robeson didn’t sing the old spiritual Go Down Moses (Let My People Go) for nothing.

In his hands, that song drew real emotional power from a real history of suffering and real oppression.  Coming from Johnson however, Moses’s words from Exodus amount to nothing more than an offensive Etonian brainfart blowing in the wind.

The only thing it illuminates is his genuinely diseased ambition – and the collective madness that has kept this bloviating oaf hovering in the political stratosphere for far longer than decency allows.

To accept its metaphorical implications, we must first see the European Union as Pharaoh.  The same Pharaoh who once enslaved the Israelites; who taxed them to death and forced them to build cities and erect monuments in his honour; who made them build bricks without straw; who threw their eldest sons into the Nile because he was that kind of tyrant.

To compare all this to our voluntary membership of a trade bloc with pooled sovereignty is to drain language of any meaning whatsoever.  That is bad enough, but Johnson also appears to want us to believe that he is Moses.  And the Telegraph – a newspaper that has long ago lost any claim to be a serious newspaper – appears to accept this claim, by superimposing Johnson’s latest attempts to undermine Cruella de May over a photograph of the Great Man sitting behind the wheel with a serious expression that some may see as statesmanlike but to others will seem merely psychopathic.

All this would be laughable, were it not for the fact that even at this late hour, this preposterous self-aggrandising fraud is still talking gibberish and his gibberish still being taken seriously by a newspaper with a circulation of nearly 400,000.

Because thoughts matter, and bad thoughts will have consequences politically, when they are elevated to collective dogma, and when those who think or express them lose any willingness to hold them up to scrutiny.   For the last three years – and longer in fact – there were men and women in this country who actually know how the European Union functions, who could have explained our relationship to it, and also told us what the consequences of leaving might be.

For the most part we completely ignored them, because we didn’t like what they said, because they were too sober and boring, because we regarded their knowledge and expertise as some kind of ‘elite’ condescension.

Instead we embraced chancers, buffoons, fanatics, mountebanks and outright liars.

And now five days before we are all due to fall off a cliff, one of the worst of them is telling us that the European Pharaoh is refusing to let us go, when the only thing stopping us has been the inability of people like him to come up with a plan that did not harm the country and break international agreements that we signed up to.

Rather than admit any of this, Johnson would have us believe that are a subjugated and enslaved people like the Israelites, that falling off a cliff will actually be just like the parting of the Red Sea, that he will be Moses, and that we are all about to enter the Promised Land.

And the fact that such things can still happen goes a long way to explaining how we ended up in this mess.

Why I’m No Longer Clapping