Heard any good rape jokes recently guys?  How about this one, which Labour MP Jess Phillips posted on twitter yesterday:

Just leaving Westminster and and man ran down the street along side me asking me about why Carl Benjamin shouldn’t be able to joke about my rape. Shouting “I pay your wages”.

As many people will know, the ‘Carl Benjamin’ referred to in Phillips’s tweet is a far-right ‘comedian’ who goes by the name Sargon of Akkad, and who famously said that he ‘wouldn’t even rape’ Phillips.  There’s a certain kind of guy that loves to make jokes like this, and a certain kind of audience that will always appreciate them, and a certain kind of disingenuous fool who will cry ‘free speech’ if anyone criticises them for doing so.

Since then Benjamin – bravely pushing back the boundaries of political correctness – has doubled down on his joke and on the attention-seeking by saying that maybe he could be induced to rape Phillips if he was drunk enough.

Now there was once a time when if you made jokes like this you definitely could not contemplate a career in politics – except in the dankest of swamps where no one with any sense of decency would enter.  But those times have changed, and over in the US we have a president who allegedly once raped his own wife.   And in Brasil a fascist has just been elected who once told a congresswoman ‘ I wouldn’t rape you because you don’t deserve it.’

Here in our benighted little island Benjamin is an MEP candidate for UKIP, whose leader Gerard Batten has described his comments as ‘satire’.

Others have defended them on grounds of ‘free speech.’  And because such disgraceful lunacy has been allowed to poison our politics, the jokes just keep coming, such as this tweet which was sent to the Buzzfeed journalist Hannah Al-Othman  by one of Benjamin’s supporters: 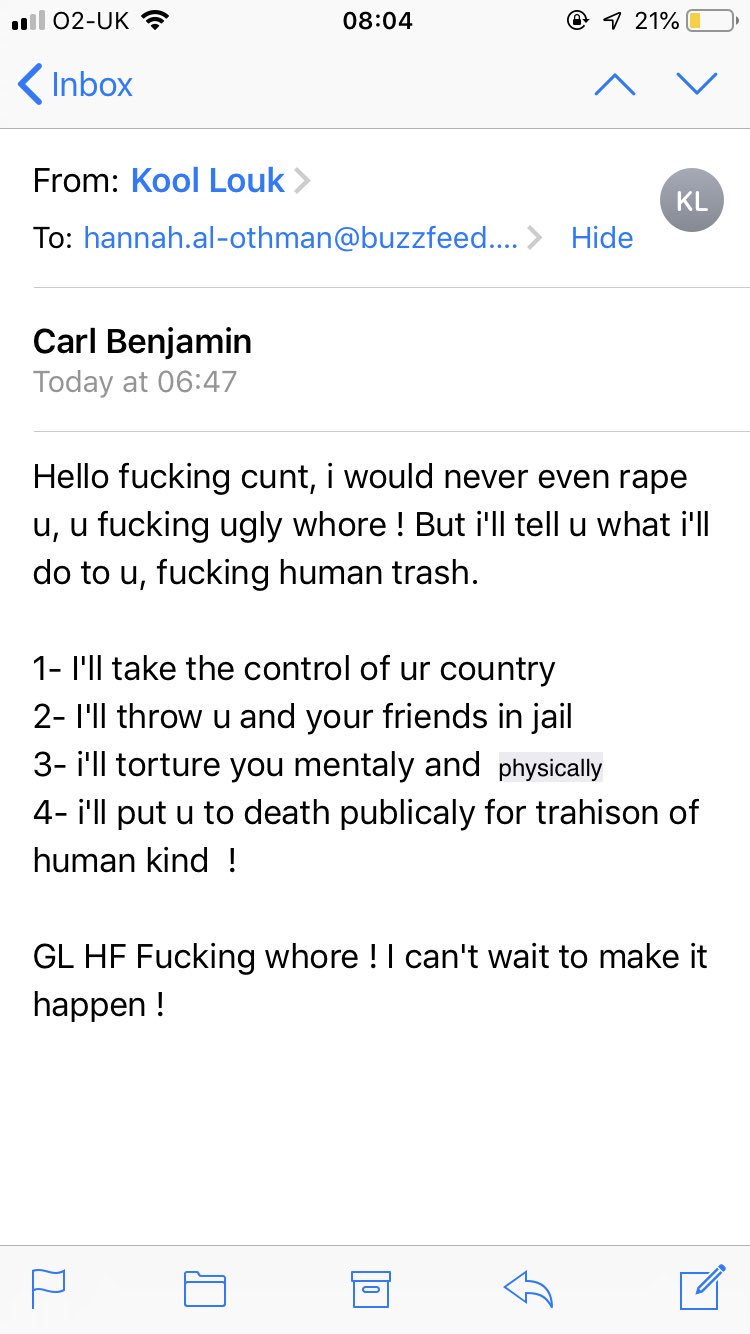 Are you laughing yet?  Well you must be some kind of snowflake or virtue signaller or feminazi.   Because this is the manosphere dude.   So man up and laugh out loud.  Like the Spanish ‘wolf pack’ did after they gang-raped a young woman in Pamplona.  Like the Worcestershire cricketer who bragged with his mates about ‘dragging the birds back’ and ‘raping them’ and is now doing five years because he did just that.

Or the ‘pick-up artist’ Roosh Valizadeh – another of the ‘satirists’ who abound in the manosphere, who suggested that women should take responsibility for being raped, and that they often made false charges of rape because they felt ‘ awkward, sad, or guilty after a sexual encounter they didn’t fully remember’.

To prevent such behaviour, Valizadeh proposed ‘that we make the violent taking of a woman not punishable by law when done off public grounds.’

This kind of humour is not new.  In the POW protocols recorded by the British and analysed in Sonke Neitzel and Harald Welzer’s Soldaten (Simon & Schuster, 2016), the following exchange occurs, when a soldier called Muller describes driving through ‘beautiful country’ at the junction of the Don and Donetz rivers in the Soviet Union in the early phase of Operation Barbarrosa:

MULLER: They were employed on road-making – extraordinarily lovely girls; we drove past, simply pulled them into the armoured car, raped them and threw them out again.  And did they curse!

Stalin was also not averse to a good rape-joke.  In Conversations With Stalin, the Yugoslav partisan leader Milovan Djilas describes how he brought up the subject of the mass rapes carried out by Soviet soldiers in newly-liberated Yugoslavia – an issue that was causing great resentment amongst the Soviet Union’s communist allies.

According to Djilas, Stalin was not pleased by these protests, responding ‘ Can’t he understand it if a soldier who has crossed thousands of kilometres through blood and fire and death has fun with a woman or takes some trifle?’

For both German and Soviet soldiers – and also for many American soldiers in liberated France –  rape was not so much a ‘weapon of war’ as the spoils of war.  In the case of the Red Army, the mass rapes of German women were partly motivated by vengeance  but Soviet soldiers also raped Polish women,  and even raped women they had liberated from concentration camps.

Considering such behaviour, the historian Anthony Beevor once remarked

Having always in the past slightly pooh-poohed the idea that most men are potential rapists, I had to come to the conclusion that if there is a lack of army discipline, most men with a weapon, dehumanised by living through two or three years of war, do become potential rapists.

Beevor noted Russian soldiers in Berlin ‘ were regarding women almost as carnal booty; they felt because they were liberating Europe they could behave as they pleased. That is very frightening, because one starts to realise that civilisation is terribly superficial and the facade can be stripped away in a very short time.’

It can indeed.   And when it comes to rape that facade is routinely violated even in peacetime.

This is why rape constitutes an everyday form of ‘phantom terror’ that is already a part of womens lives across the world.  It’s why women think twice about where they go jogging, about whether to walk home alone at night, about what might be in their drink, or what could happen if they drink too much.

And what is shocking about our 21st century rapey jokey culture is that sexual violence is being legitimised, trivialised and even celebrated, by a political ‘movement’ that includes ‘pick up artists’, manosphere websites, incels, far-right provocateurs, and outright fascists, and which is now reaching towards the mainstream.

This why Carl Benjamin is still a candidate.  It’s why the Spanish far-right party Vox proposes to change laws on gender violence on the (false) basis that most accusations of such violence are made up.

On the one hand the threat of rape is being used as a political weapon to terrorise and intimidate women who appear in public and speak in public or on social media.

At the same time the fact that this threat is now being used so openly and so frequently is a testament to the continual overlap between our toxic, poisoned politics and a certain kind of toxic masculinity, that regards feminism as ‘feminazism’ and women as sexual toys whose attractions can be measured by whether or not they are considered good-looking enough to rape.

Those who propagate such jokes are not transgressors or edgy provocateurs: they are actually creating a context in which women are more likely to be raped.

And behind all the jokes and sniggers, it’s impossible not to detect a certain loathing and resentment towards the whole notion of gender equality, and a longing for the good old days when men could  rape whoever they liked and women just had to shut up about it.

And faced with this torrent of misogynist filth, it’s incumbent on all of us – whatever our gender and sexual orientation – to call time on this rapey jokey culture before it pollutes our politics and our societies even more than it has already

Jelly on a (Tory) Plate