In the last week or so a lot of people have been saying   to Israel on both sides of the Atlantic.   On Friday David Ward, Liberal Democrat MP for Bradford East,   wrote the following words on his website after signing a Holocaust Memorial book in anticipation of last Sunday’s Holocaust Memorial Day:

‘Having visited Auschwitz twice – once with my family and once with local schools – I am saddened that the Jews, who suffered unbelievable levels of persecution during the Holocaust, could within a few years of liberation from the death camps be inflicting atrocities on Palestinians in the new State of Israel and continue to do so on a daily basis in the West Bank and Gaza.’

These statements produced the usual outrage, followed by immediate condemnation from his own party leadership, which described Ward’s ‘ use of language’ as ‘unacceptable.’

That same day Ward was subjected to aggressive questioning on Sky News, in which he was accused of   ‘failing to consider the suffering…of the Israelis who are facing constant bombardment on their homeland’ and ‘exploiting the Holocaust for political posturing.’

Ward was clearly nervous and on the defensive, but his interview was certainly not the ‘car crash’ described by rightwing blogger Paul Staines.     Ward insisted that he was not referring to all Jews in his criticisms, but to those Jews who had been responsible for ‘unbelievable inhumanity towards Palestinians in the past and today’.

He also empathized that he regarded attacks by Hamas on ‘innocent Israelis’ also constituted ‘atrocities’, and categorically rejected the interviewer’s suggestion that he was attempting to ‘compare Nazi Germany with Israel.’

Nevertheless, by the end of the day, Ward had posted a statement on his blog, declaring

‘I was trying to make clear that everybody needs to learn the lessons of the Holocaust. I never for a moment intended to criticise or offend the Jewish people as a whole, either as a race or as a people of faith, and apologise sincerely for the unintended offence which my words caused.’

This was not good enough for the Israeli embassy, which issued a statement on Sunday condemning Ward’s ‘ troubling ignorance of the brutal campaign of terrorist attacks waged against Israeli children, women and men by Palestinian terrorist groups, and of the extraordinary efforts made by Israel to protect its citizens in an effective and humane manner.’

Ward was not the only person in trouble for saying the wrong things about Israel.     On Sunda, the Sunday Times cartoonist Gerald Scarfe published this cartoon, accompanied by the caption ‘ Will cementing the peace continue?” 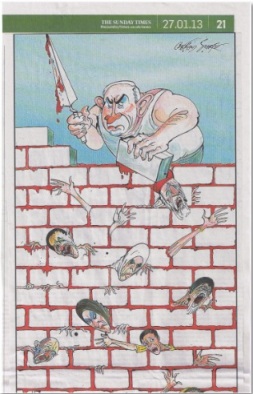 Scarfe’s ferocious assault on Netanyahu once again provoked a media firestorm, coupled with accusations of anti-Semitism.     The Board of Deputies of British Jews described the cartoon as ‘ shockingly reminiscent of the blood libel imagery more usually found in parts of the virulently antisemitic Arab press’.

The speaker of the Israeli parliament wrote to his British counterpart John Bercow, describing the cartoon as  cartoon as a throwback to ‘ the vicious journalism during one of the darkest periods in human history,’ and a ‘ testimony to sick undercurrents in British society’.

Initially, the Sunday Times defended its cartoonist, describing the cartoon as a ‘typically robust’ Scarfe image that was aimed ‘squarely at Mr Netanyahu and his policies, not at Israel, let alone at Jewish people.’   This opinion was not shared by the paper’s owner Rupert Murdoch, who tweeted

‘Gerald Scarfe has never reflected the opinions of the Sunday Times. Nevertheless, we owe major apology for grotesque, offensive cartoon’.

The paper’s editor Martin Ivens immediately backpedalled. On Tuesday Ivens described the publication of the cartoon on Holocaust Memorial Day as a ‘terrible mistake’ and declared that Scarfe had ‘crossed a line’ with the image – echoing an accusation which had also been made by the Israeli embassy.

That same day, Scarfe himself posted an apology of sorts on his website,   in which he too denied allegations of anti-Semitism and insisted his cartoon was

‘ a criticism of Netanyahu, and not of the Jewish people: there was no slight whatsoever intended against them. I was, however, stupidly completely unaware that it would be printed on Holocaust Day, and I apologise for the very unfortunate timing.’

Apologies were also coming from the other side of the pond.   This week, Obama’s Defense Secretary nominee Chuck Hagel has continued to receive a torrid time at the Senate confirmation hearings from Republicans.   Since his nomination became public, Hagel has been subjected to a vicious campaign, spearheaded by neocon warmonger William Kristol’s Israel Emergency Campaign (ECI),   which has accused him, among other things, of being ‘hostile to Israel’ and anti-Semitic.

Earlier this month Hagel had apologized for a 2006 interview in which he referred to a ‘Jewish lobby’ that tended to ‘intimidate’ lawmakers, describing this reference as ‘ a very poor choice of words’ that he conceded ‘can be construed as anti-Israel.’   At yesterday’s hearings, Hagel repeated the same apology and said that the should have used the expression ‘pro-Israel lobby.’

This wasn’t good enough for Republican senator Lindsay Graham of North Carolina, one of Hagel’s fiercest opponents, who demanded to know why he had not signed a letter in support of Israel a few years ago, and declared ‘The lack of signature by you sends chills up my spine.’

Another Republican asked Hagel whether he was prepared to defend a statement in which he said that the Israelis ‘keep Palestinians caged up like animals’.     Somewhat pathetically,   Hagel replied ‘ If I had an opportunity to edit that, like many things I’ve said, I would like to go back and change the words and the meaning.’

No doubt he would.     Because all these mea culpas – and the orchestrated outrage that generated them in the first place – are a testament to the unique place that Israel has managed to carve out in the political culture in both America and Britain.   In the United States in particular, it is now clear that ritual declarations of loyalty to Israel and an unqualified acceptance of Israeli policies have become a prerequisite for key positions in the US government.

In both countries, a powerful alliance that includes hardline Zionists, conservatives and the far-right have combined to create a bullying inquisitorial climate in which criticism of Israel by mainstream public figures and media outlets is deliberately and cynically conflated with anti-Semitism or support for terrorism.

One of the reasons why this combination of manipulation and bullying is so effective, is because of the cowardice of mainstream politicians, many of whom are perfectly aware of the gross injustices being perpetrated against the Palestinians yet quake at the mere suggestion of anti-Semitism or references to the Holocaust, or simply the suggestion that they might not be pro-Israel enough.

Then there is an equally craven media, which must always ‘balance’ even the most egregious acts of Israeli violence towards the Palestinians or find excuses for it.     All this has given Israel a power that would be   unimaginable – and unacceptable – if any other country were involved, which reinforces a sense of Israeli impunity and postpones the prospect of justice for the Palestinians forever.

And that, in the end, is the point of all the allegations of anti-Semitism and ‘insensitivity’ that have been thrown around the last week, and it really is time that more politicians and public figures refused to capitulate to this kind of emotional blackmail, and stopped saying sorry to a state that has a great deal to apologize for itself.