We are all Greeks!

The ghost of Percy Bysshe Shelley danced across the world on Saturday, draped in a Greek flag,   as demonstrations took place in more than 20 cities  in an international day of action in solidarity with Greece and in opposition to the savage austerity measures that are reducing large swathes of the Greek population to penury.

It was Shelley who once declared in Hellas (1821) that ‘ We are all Greeks.  Our laws, our literature, our religion, our arts have their roots in Greece.’

On Saturday protesters across the world evoked Shelley’s dictum as a rallying cry for  the 21st century’s new age of austerity.    In Chicago demonstrators gathered outside the Greek consulate.   In Italy two mayors symbolically gave up their salaries and donated them to Greek charities.  There were also demonstrations in Edinburgh: 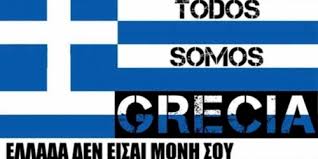 All these demonstrations shared the same opposition to ‘ the dictatorship of the financial markets and the troika: EU, ECB and IMF’ and the same core  principle expressed by the Real Democracy Now! movement that ‘ When one people is attacked, all peoples are attacked.’  In its 2008 Communication on the EU’s ‘Renewed Social Agenda’,  the European Commission affirms that

Europeans share a commitment to social solidarity: between generations, regions, the better off and the less well off and wealthier and less wealthy Member States. Solidarity is part of how European society works and how Europe engages with the rest of the world… Solidarity means action to help those who are disadvantaged who cannot reap the benefits of an open, rapidly changing society. It means fostering social inclusion and integration, participation and dialogue and combating poverty. It means giving support to those who are exposed to temporary, transitional problems of globalisation and technological change.

These principles have been disgracefully absent in the ongoing humiliation of Greece and the EU’s craven collusion in the brutal unravelling of Greek society imposed by the financial markets.  Saturday’s demonstrations were a reminder of the European Union’s own lost ideals, and an invitation to contemplate a different kind of world in which, as Shelley wrote, it becomes possible

To defy Power, which seems Omnipotent;
To love,  and bear; to hope,  till Hope creates
from its own wreck the thing it contemplates