We Need to Talk About Agrabah

Last week’s poll of Republican primary voters by the left-leaning Public Policy Polling firm has attracted  the usual mockery and arrogance from  the usual suspects.  The poll found that 30 percent of Republican voters believe that the fictional nation of Agrabah, birthplace of Aladdin,  poses a national security threat to the United States and should be bombed, whereas thirteen percent opposed bombing.

Among supporters of Donald Trump, the two figures were 45 percent and 9 percent respectively.  The poll also found that 36 percent of Democrat voters opposed bombing Agrabah, while 19 percent supported bombing the country.

Now some people have seized upon this poll to suggest that some American voters are not as well-versed as they should be in the history, culture and politics of the Middle East, and may even have a dangerously distorted understanding of the region. Others have asserted that U.S. military power should not be directed against an imaginary country.

Both these notions are false, and typically emanate from the same commie/pinko/liberal circles that have already placed the security of our great nation in grave danger on so many occasions.   Firstly, there is absolutely no reason why a country should not be bombed just because it does not exist, and if we look more closely at Agrabah, there are plenty of reasons American voters are right to  be concerned about it even if it doesn’t.

Physically, Agrabah looks a lot like places we have already bombed: 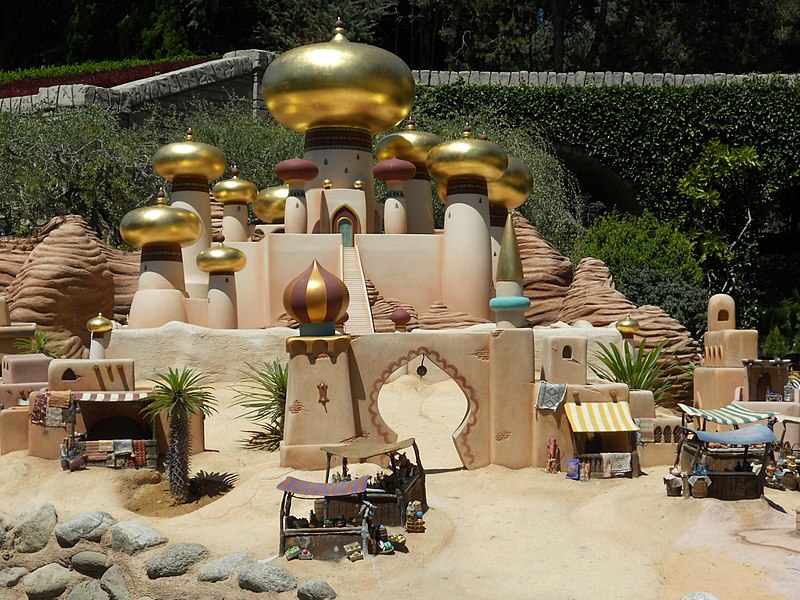 Such places  are not that different from the artificial ‘Arab’ towns and Potemkin villages that the U.S. Army has built in Virginia or other places to prepare for ‘Military Operations on Urban Terrain’, or the Middle Eastern cities that appear in many first person shooter video games.  So Agrabah is pretty much of a muchness. As the original 1993 Aladdin song once put it:

Oh I come from a land/ From a faraway place/ Where the caravan camels roam/ Where they cut off your ear If they don’t like your face/ It’s barbaric, but hey, it’s home.

Some of you might remember that the line about cutting off ears was   changed after pressure from the same politically-correct, Islam-is-a-religion-of-peace crowd who are currently undermining our national security, on the grounds that it was ‘racist’, but any patriotic, red-blooded Republican voter knows that the writer was telling it how it was and how it still is.

Then there are the people.  Specifically, there is Jafar the Grand Vizier of Agrabah and advisor to the Sultan.  Jafar is an evil sorceror, a tyrant, a sadist and a psychopath, who tortures his own people.  He wears a turban, like Abu Bakr al-Baghdadi and that sheikh whatshisname from Hezbollah. He is devious, sensual, corrupt, and power-hungry.  As the song Arabian Nights put it:

In the palace, right here, lived a wicked vizier; the advisor to Sultan Hamed. And this part-time magician, this amateur seer, wished his boss, the good sultan, dead. He was charming and slick, but unspeakably sick, this despicable parasite. What a villain, boo hiss! Further proof, dears, that this is another Arabian Night.

The Disney character profile describes Jafar as psychopathic, sadistic, hysterical, deranged, narcissistic, manipulative, and driven by an ‘obsessive desire for power and sense of entitlement.’ Jafar is also, literally a snake, who reveals his reptilian inner self when he gets hold of the Genie’s lamp in the Cave of Wonders.

In other words, another Arab in another Arabian night, who better be put back in his magic lamp before he becomes a danger to us and a danger to  global security. After all, we know what Arabs in caves can do to us, and just because Aladdin got the lamp away from Jafar twice, doesn’t mean he always will.

We invaded Iraq for less, and so I say, to paraphrase Dick Cheney, that if there is a one-percent chance that Jafar might get back into the Cave of Wonders, then we have the right to turn his country into a car park.

And there’s another thing: Princess Jasmine. That girl is hot, but her Disney character profile says that

despite living a lavished life (sic), Jasmine often feels suffocated by the laws of her kingdom, which restricts her from socializing with her subjects, as well as forcing into unjust practices, such as forced marriages.

Well we know what to do when we see Arabs treating their women like that.

And the fact that Jafar lusts after her makes an intervention even more urgent, because the Disney profile makes it clear that this sleazeball wants Jasmine ‘primarily for her good looking body, and not for Jasmine herself as person.’

The profile also points out that he ‘first creates a golden crown for her from her shackles…with a wave of his hand, saying that a girl as beautiful as her ‘ should be on the arm of the most powerful man in the world’ and he even says that Jasmine’s speechlessness is ‘ a fine quality in a wife.’

Now that is sexism. And remember that we knocked over the Taliban to stop stuff like that from happening.

OK, some of you might say, what about the geopolitical repercussions?

What happens if we bomb Agrabah and it turns into a failed state?  What about Afghanistan, Iraq or Libya? What happens if kill civilians?    Suppose bombing Agrabah isn’t enough and we have to put boots on the ground?

I say, this is a risk worth taking,and anyone who won’t take it, as Ralph Peters says of Barack Obama, is a total pussy.

And to those of you who still say, but Agrabah isn’t real, I say, when was any of this ever real?

Beware the Lies of March